I’ve spent the last three days watching Suzanne do a ci rotation on area and perimeter with her children, fourth graders. (It is amazing how big these kids seem. I noticed them as second graders a couple of years ago when the Ed10 class was working in her room during after lunch recess. They have grown so much.)

Suzanne’s rotation is around four rather complex math problems involving area and perimeter in very real life (authentic) situations. One problem has to do with creating a pan size such that the largest number of brownies can be created given a perimeter of 14 inches. ANother problem has to do with creating a border around a mirror that has uneven measurements thus creating a situation where kids have to move back and forth between fractions and decimals with uneven numbers. A third problem has to do with another kind of border calculation involving all kinds of transformations of numbers. The problems are rich in that there are more than a few ways to approach them, in fact, even to understand the problem. The kids can use graph paper to figure out solutions – drawings, formulas, diagrams, and so on.

In watching this, I was struck with several feelings and observations.

First the feelings. At the end of the hour, after the children had shared, there was a palpable tension in the room. In fact I rubbed Suzanne’s shoulders a bit as if to emphasize that the session had been a tense one to watch much less a tense one to actually participate in. Two groups ground to a halt over iron-willed conflicting opinions of how to do the problems: one child saying to it this way, another saying do it my way, neither child willing to give in to the other. A real contest of wills. Me vs. you. Not how can we go about this for the good of the group. There were children in the two groups who did appeal to the collaborative necessities of the work, the need to suspend your own forceful will in order to be able to move ahead but in both cases, none of the protagonists bought it. So it was only the five minute warning for wrap-up that actually forced whatever forward movement was left to be squeezed out from the work. Suzanne commented that in both cases, it was probably a good thing for at least two of the people to not get their way. They are people who are very used to forcing their will on others and the groupwork was not allowing that to happen. My perspective is that it looked painful. Painful it was but its occurrence was not necessarily a bad thing. Here are some actual comments from children within the groups that were at loggerheads. (In one case, one of the children had pushed his/her chair back from the group and was being spoken to – almost counseled – by another group member.

“It’s a stupid topic to be arguing about.” – It was. It was whether or not to express a measurement in fraction form or in decimal form. The same was true with the other group argument. It was all around a small point.

“I’m not saying you should change your opinion. No, I’m not. I”m just saying we should try it this way.”

“You always get what you want to do. Whatever… .”

“If we were all leaders, we could do what we wanted to do, couldn’t we.?”

“They are always disagreeing with me. I just feel so different from the entire group.”

“Take a deep breath and pretend that it never happened.”

I got pretty heavy. When Suz. did the wrap-up, she asked for a few moments of quiet. Asked people to take a deep breath or two, asked people to relax, and recognized with all of them that they had worked hard and that some groups had had a difficult time of it. You could have heard a pin drop during that period of time. I felt that everyone knew it had been an emotional hour.

When it was all over, she asked the groups to process with each other

Here are some behaviors I noted that made things go poorly.

When spoken to by another child in the group in an attempt to redirect obstinate behavior, this particular child stuck his fingers in her ears so he could not hear the feedback. Other ways this go poorly include sliding or pushing one of the cards back and forth across the surface of a table so you distract and even hit other kids in your group. Also, physically pulling out of the group, digging in your opinion and refusing to change just to show you are more powerful than the person who’s asking you to do what they want to do.

These are some feelings I saw that went unexpressed. I know kids were sweating. Some were feeling hot and red faced. Teary. Confused with a noise in my head, kind of like rushing water. Angry. THese feelings should probably be processed.

And observing all this gets me back to the whole “nice” behaviors we tend to impose on kids. This work is tough and sometimes what happens isn’t nice, but it is quite real. And the real part of it needs to be acknowledged as a normal part of group vwork. Kids might be a whole lot more accepting of the fractiousness that can occur if it was recognized for what it was and made just another part of the possible things that can happen. Even with fractiousness, kids were learning.

Suzanne was going over what it looks like when someone needs help but they don’t know they need help. What might it sound and look like?

Sound like: I don’t get it. Say that again. What are you talking about.

Look like: quizzical look; floating off task, looking away; fooling around and sabotaging the group’ breaking or taking materials and holding on to them. putting your head on the desk.

These were the multiple abilities that were noted during the session. Notice the use of very distinctive math language. You have to know math to recognize these abilities in what the kids were doing.

breaking problem down into smaller parts

paraphrasing, use of synonyms

using the properties of numbers

converting units from decimals to fractions

My favorite observation (makes me wonder what’s going on big time – a fun inquiry coming up) during this third day’s events happened during the wrap up. I’ve got a couple of things going here. One, I’m seeing the kids use pretty sophisticated math and I’m thinking they are learning a lot of new stuff or applying old stuff in new ways, or clarifying just what old stuff means. All these are “learnings” to me. Two, I’ve done some analysis of the learning stations using the standard ci observation format and even the groups that were arguing had minimally 33% talking and working behavior. Three, they just looked so damned engaged. Several times, I glanced around at the groups and they were everyone of them fully engaged. Every child bent to the task. I think they are all learning something. I’ve already calculated the average talk and work behavior across all groups of three sweeps as being 54%. Research wise, they are learning. Do they think they are learning? So, I slip a note to Suzanne asking her to ask the kids to raise their hands to indicate if they had learned something new today or clarified something they thought they knew. I expected half the class at least to raise their hands. One boy raised is hand. Period. Just one kid. I am amazed. One??!

Now what does that say about what’s being learned. Are they learning but don’t recognized that they are learning? What do they think learning is? Is it important for children to know that they are learning something? How do they get to ‘know” it? Does a teacher tell them what they are learning or do you tease it out of them with even a longer kind of discussion. I wonder if a KWL would work here. Even a reverse one. Where you looked at a report out, and then figured out what question it really asked, and then generated a list of what you knew to be able to ask that question. (Anyone ever done that???) A reverse KWL as an assessment of what ‘s been learned?). These are all really good questions. I shudder to think the number of times I’ve walked out of class thinking my God, what a good discussion we’ve just had. I suppose what I just saw in here raises the question, “What you mean we, white man?” (Tonto and Long Ranger joke.) Have we had a great learning experience if I’m the only one who is acknowledging what’s been learned? Think about all the times we make assumptions about what kids are learning without asking them if they think they are learning something. I’m not saying there has to be a one to one correspondence here but at least more than a 1:17 ration would be helpful. (18 kids present today.)

(g1 and g3 were the two groups with the loggerheaded discussions.)

Suzanne said something about this class having discussions at the beginning of the year about what learning was. I’ll have to get back to her about it. It’s an interesting area of inquiry. How do children understand learning? What have they done that will enable them to say they learned something. Maybe from their perspective they really are being honest when they answer, “Nuthin.'” to their parent’s inquiry, “What did you learn in school today, Dear?” 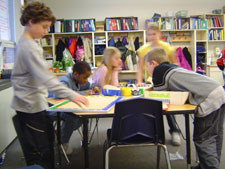 This is a shot of one group. Everyone engaged, everyone saying something about the task at hand within a two second time period of this picture being taken. The two girls were doing the most direct work on the problem. The two boys on the left were listening and adding valuable comments. The other boy was watching, and listening (?) and thinking (?). Who was learning here?