Centennial Woods used to be a farmland. In 1870, William had 60 acres of land, 30 acres of woodland, wheat, corn, oats, buckwheat, Irish potatoes, butter, milk, and hay. The land was then sold in 1879 to the Lorenzo and Grace Ainsworth. This land was purchased in 1904 by the University of Vermont after Lorenzo and Grace Ainsworth died. The university designated 1/3 of the land, 65 acres as a natural area protected by the Vermont Land Trust. Another third of the land was given to development. The last third, is owned by the University. Evidence of this once being a farm (noted from my spot) could be the white pines. White pines are one of the first trees that grow as a result of a natural succession, before there’s a mature, complex forest. There are many mature white pines in my area and young deciduous trees. Deciduous trees are still growing; this suggests that the woods is still in the process of secondary succession as a result from the clearance of the farm. Also the Eastern white pines were in rows which could indicate that they were planted. My spot is downhill so it may have been left as a pasture.

There are two streams that cut through the Centennial area, the Wool Pullery, and Centennial Brook. Both eventually meet together. My spot is part of the Centennial Brook stream. There were beaver dams that existed 10-15 years ago and fragments of the dams can be seen today. There are fallen trees that lay across the stream where a dam used to exist.

Today, Centennial Woods is used for recreation. You can take a hike, bike, or walk your dog through the woods. It is a great space for the community, those who live in Burlington and those who go to the University. Centennial is also used for educational purposes. It’s truly a unique natural area with a variety of biodiversity in ecosystems.

Centennial also has a homeless population. Homeless people choose to live there and forage for food and create their own space and wander in the woods. This connects to a sense of place. Elaine Vidal in her thesis discussed about how a homeless person was recorded and was asked to move out of Centennial and was advised to move to a shelter out of the woods. This had probably been an important place to that person; it was a home for them. 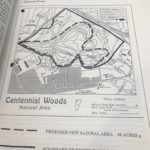 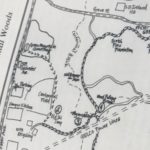 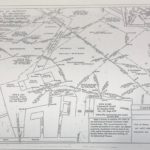 Manhattan was first called Mannahatta, or “hilly island”. The Lenape tribe used the city as land for hunting, fishing, and for agriculture. It is suspected they called the Hudson Bay Scheyischbi, or “the place bordering the ocean.” The tribe traded with each other and other tribes and traveled by water as well as through trails. In this time the island had kept its landscape preserved. They had a spiritual connection to the natural world as an equal to them. They had creation stories and traditions they followed including Turtle Island, Visitor from sky world, and crow gives corn. There was also a tale called The Tale of Corn Woman. There was rich biodiversity that existed during this time and the Lenape had used various animals and plants. Examples of animals and plants the Lenape most likely used include: American eels, oysters, clams, White-tailed deer, ducks, fishes, turtles, Indian hemp, milkweeds, Hickory, Oak trees, and Elms.

The vegetation of my spot would have been, according to the map from Mannahatta, most likely a red maple-hardwood swamp or a coastal plain Atlantic white cedar swamp.

In 1624, the Dutch settled on the Manhattan island. The Dutch took over Manhattan in 1626. In the 18th century, milling was the main industry in New York and windmills were used. There was also ship building and ports on the Hudson for shipment of goods to and from England. The first railway was used in 1869. In the 19th century, New York City became urbanized. In the late 1800s it became more populous. Immigrants came from Europe. The Statue of Liberty was brought as a gift from France in 1888. In the 20th century, famous tall buildings, bridges, and museums were built. The population kept growing and by 1980, NYC had 7 million people.

In 1853, the New York State legislature enacted a law that stated that more than 750 acres of space in Manhattan would be set aside for the purpose of creating a public park. Central Park was established in 1857 and is a well known natural area that was designed by a journalist and agriculturalist, Fredrick Law Olmsted. His vision was to create Central Park as a landscape that allowed for the visitor to feel a part of nature. It would have “sweeping meadows and vast water bodies designed to appear limitless” (Central Park Conservancy). The “Greensward Plan” was created to design the park. Central Park is known for recreation and is a tourist attraction. There are activities including: canoeing, bird watching, carriage rides, bike riding, baseball, ice skating, etc. There were four roads that were created to cross through the park on 79th, 86th, 96th, and 65th streets. They followed Olmsted’s vision because the cars go under tunnels and don’t distract from the natural beauty of the park. In the 1900s the natural areas began to worsen in integrity. Citizen activism began to take root in the 1970s. Elizabeth Barlow Rogers became a Central Park administrator and became a part of the Central Park Task Force, which later joined with the Central Park Community Fund. These two groups became one called the Central Park Conservancy, and this conservancy has worked since the 1980s to restore landscapes. 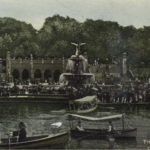