Mushrooms are important decomposers. The fungi produces spores that later create hyphae. There is a biological network of hyphae, called mycelium. The mycelium helps to find nutrients for the mushroom. Mushrooms are part of a larger structure, fungi. Fungi decompose leaves, stems, and wood. This is organic matter that is a part of the O horizon, humus for soil. Organic matter is broken down. According to Dr. Stewert, mushrooms that grow on wood help to break the wood down into its “component chemicals.” There is also a symbiotic, mutual relationship between fungi and plants. Plant roots connect with fungi to form mycorrhiza, which effectively absorb nutrients and water. This allows for plants to have nutrients and fungi to have organic carbon. 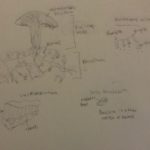 Its appearance is orange yellow with a white basal attached.

The appearance is reddish color on the cap and yellowish or white gills. The cap is cushion shaped, with a center that is vase shaped. The stalk is white to yellowish white and is more thick toward the base. It’s fragile and has a smooth sticky feel. It tastes acrid.

It tends to grow in boggy or coniferous areas and usually is on sphagnum mosses.

It’s fan shaped, semicircular. The color of the cap ranges from pinkish to cinnamon-buff to gray and is “silky-hairy, zoned, radially furrowed to wavy.”  The fertile surface varies in colors (looks layered) orange that fades into cream or cinnamon-buff.

It grows on dead deciduous twigs and branches. It spreads all across America except the Rocky Mountains.

brown or reddish brown in color, flesh is white and tubes around stalk is greenish yellow, stalk  can be either thick and club shaped or thick and bulbous

It tends to grow under conifers or birch and aspen

The cap is kidney shaped with the one round part facing out, on top. It is dry and can be “hairy to scruffy-scaly” with brown or tan color

stalk 1/4-5/8″ pinkish-brown and narrow, flesh is narrow and tough, and has gills that descend to the stalk

It grows on logs and stumps

It either grows in an overlapping formation or in rosettes. It is multicolored and can be silky, hairy, or velvety.

It tends to grow on dead deciduous wood, in wounds, or conifers.

It has a black to brownish color and usually comes in clusters. It has multiple small black dots on it. It feels like jelly.

It is a wood-rotting species and tends to be found on branches of broad leaf trees.

Season: All year round.

It is brownish red to grayish black in color. It is shaped like an ear and feels rubbery with folds. It is edible and medicinal.

It grows on decaying wood.