When observing the past maps used for war you can note the change of Manhattan and the city over time. The maps during the 1700s and 1800s were incredibly accurate. They showed the topography of hills and also showed wetlands, rivers, ponds, beaches, coves, and bays.

Manhattan was admired by the Dutch for its freshwater resource, such as ponds and springs.

The bedrock geology of Manhattan is primarily Schist. It is a metamorphic rock that formed 450 million years ago as a result of the collision of the East Coast of North America and the Taconic land. The collision caused intense pressure on the shale that was formed and it was turned into Schist.

In my spot, soils were composed of glacial till. Glacial till was formed by erosion of material from a glacier. Glacial till is characterized by a disordered variety of rock sizes. This is the parent material for the soil.

The soils of Manhattan are not deep. There is more glacial till percentage cover as well. This made the soil less fertile.

Mannahatta means the “Island of many hills.” Manhattan was divided into many hills at different elevations. My spot is on a hill that may be an estimated 0-70 feet. 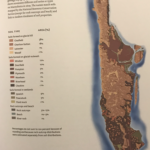 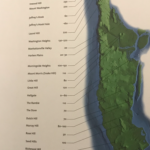