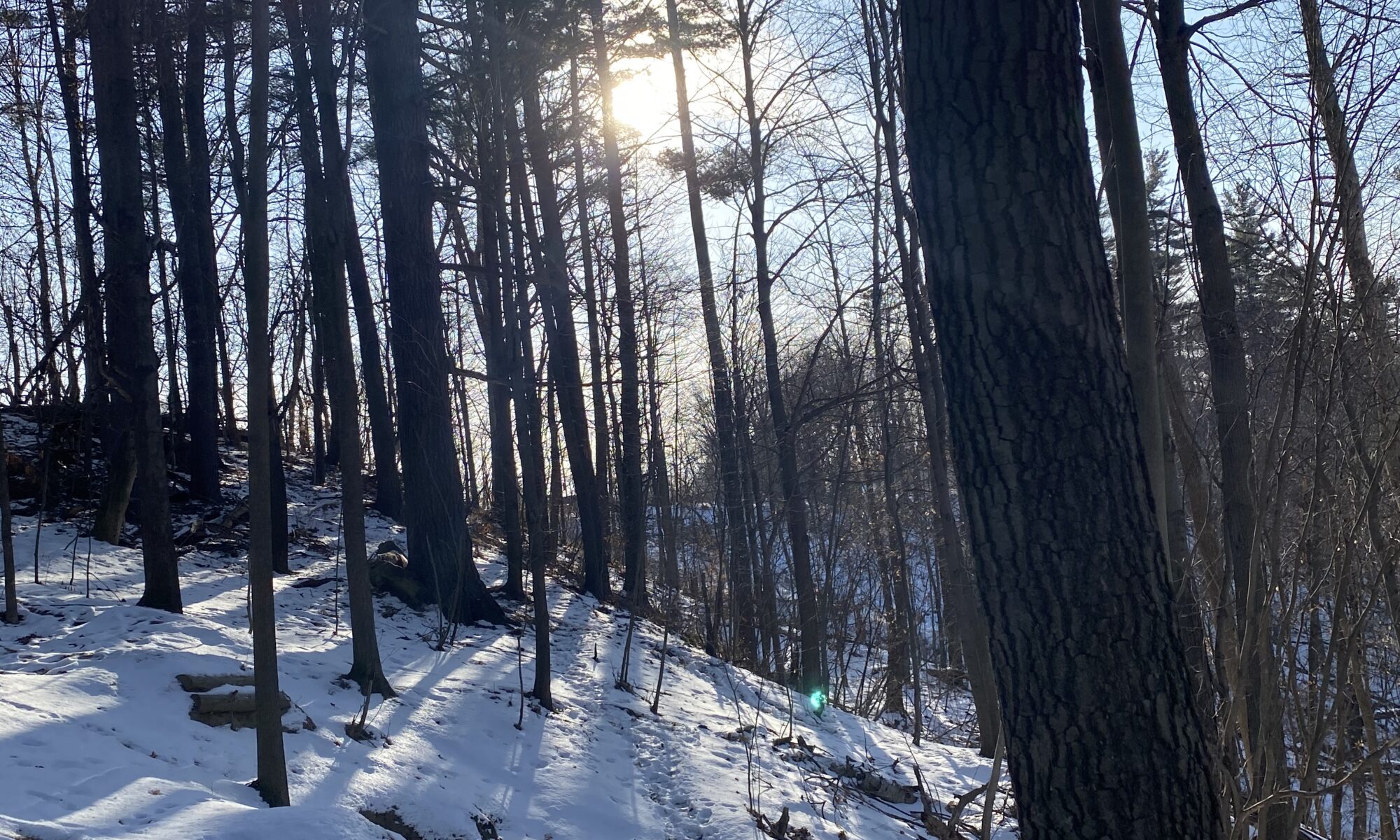 Welcome back to Trinity Woods 2020! The ground is covered with even more snow, but the paths are now as icy as ever most likely due to foot travel compacting the snow and refreezing. There were many tracks from small animals, mostly gallopers. By the looks of it, the tracks were of a gray squirrel and a snowshoe hare. The weather was at 31 degrees Fahrenheit, mostly sunny and not much wind. The hemlock stand featured a new fallen pine, but it was already dead before. The twigs I located were branches of an American Beech, a Silver Maple, and a White Walnut (Butternut). There was no signs of animals out and about at the time I traveled to the site. However, it was clear that life was abundant in these woods, even in January. The tracks and the tree buds indicate life in the area and make you feel right at home in a small natural area.

Burlington is a lovely town filled with many places and things and people that make it the place it is. It really has a sense of place beyond the suburban sprawl of South Burlington. My town at home is similar in that it tries to maintain its sense of place next to a blocks of block stores and the same chain stores and restaurants you’d see in any town. Lewisville, North Carolina is the town that I call home. Our small population of around 15,000 people allows for a rural sprawl of residential, private land as opposed to the suburban neighborhood “glory-land” of the neighboring town, Clemmons. The sense of place is readily apparent throughout Lewisville, except for two of its shopping centers, which house all block stores. The history of Lewisville is short, as it was only recently incorporated in 1991, but a focal point of that history is the creation of the town square, dubbed “Shallowford Square,” which set the tone for the design of the rest of the town, making it pedestrian-friendly and giving the town more of a sense of place. The “downtown” area was designed to keep the same original style of buildings, meaning many homes along the main strip were just converted into business, while maintaining the aesthetic that the town planners aimed to keep. Beyond the “downtown” area, the town was and still is comprised of mostly farms. There is little enough population to keep from too many close-quartered neighborhoods that frequently pop-up in the suburbs. Most of Lewisville is treated as a rural area, so the sense of place outside of downtown is typically that of nature and the trees in a particular area. A place in Lewisville that is particularly well-known for its sense of place is Conrad Rd. The road is lined on either side with maple trees and beyond those is just a field and it creates a tunnel of leaves that changes colors throughout the season. There are multiple ways to get to my house, but this one is the most beautiful. Even though it takes longer if I take Conrad Road, it makes me feel more at home.

The sense of place in my hometown has not really changed much since I have moved there from San Marcos, California in 2008. While the town has a nice aesthetic by maintaining so many trees and forested areas around the stylistic houses and businesses, it is mostly older folks who live in the town and run the government. This makes for a stagnant sense of place as the actual aesthetic never really changes, but with the seasons change, the trees and surrounding forest make some aspects of the architecture pop throughout spring and summer. The place that has been developed by Lewisville town planners throughout the years helped develop me into feeling like I grew up in a small southern town. It felt smaller than it was which made me feel a little bit bigger in the world. Lewisville has linked itself with a stale pattern of sluggishness in my mind, but will always be a place for me to feel at home again.

Trinity is a far away place comparatively, but the woods feel closed in by development. The only exception to this is the woods go all the way down the hill and up the hill across the creek. Characterized by old mountain bike jumps that look too scary to try, and a steep hill that takes serious work to hike back up, the woods here are really defined by the landscape. On top of the hill, there is almost no undergrowth and fallen branches. However, as you walk down the hill towards the creek, the forest floor is more crowded with more undergrowth and more fallen branches. This area is found by taking a trail from the top of Trinity Campus near Farrell Hall and venturing around the mountain bike trails. You know you are there when you can see a creek and a marshland in the distance in a field before an apartment complex, but you are still on a wooded hill on the trinity side of the creek. The experience of being here is calming. Any natural area with a visual on a waterway no matter how small is going to be peaceful for the majority of the human race. Slowly and slowly the leaves are changing color and falling off. The forest floor is covered in dead leaves today. Winter is coming fast and will transform these woods into a frigid wasteland with a frozen creek.

Welcome to my Phenology Blog! We wander to the woods behind trinity campus to discover a set of forested hills! Down the hill is a small creek! Come check it out! 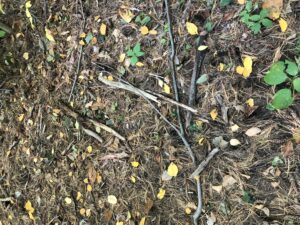