Turkey: (How) Has the Secular Changed?

Posted on December 4, 2015 by Cristina MacKinnon

As scholars of religion, when we think of “secularism,” we think of an institution, state, or body that is overtly non-religious. When we hear that term ascribed to something, we are expecting the exact opposite of what we have come to know as “religion.” But what if this idea of secularism has shifted and become antiquated? The Republic of Turkey serves as an example of a nation that has adopted a proclaimed secular nature since the first president Mustafa Kemal Atatürk’s devoutly secular reimagination of the Ottoman Empire in the mid-1920s. Today, while ninety percent of Turkey’s inhabitants identify as Muslim and many of its leading politicians are Islamist, the nation would seem to a Westerner’s perspective to be quite un-secular. Rather than blindly accepting this cursory assumption, we will explore the ways in which the work of “the secular” is actually just as legitimate in the country with all its religious intertwining, albeit, slightly shifted from its original imaginings.

First, in order to see how the notion of secularism has shifted, it is necessary to understand the uniqueness of an “Islamic secularism.” In an encyclopedia article on the term, Charles Kurzman defines it as a “movement that seeks to limit the scope of [Islamic] authority (Kurzman 2004: 614-615).” The concept spread throughout the 19th century as a reaction to excessively powerful regimes that derived their power from religion; many saw a theocratic government to be problematic and began to understand an authoritative, political Muslim rule as an archaic fixture that had no place in modern civilization. The question of whether or not Islam is inherently modern is one that pervades Islamic studies, but here we will understand modernism as a form of society in Turkey, at least at its inception (Kumar 2008: 240-254). In accordance with this view, Atatürk’s philosophy of Kemalism encouraged nationalism, embraced democracy, and disestablished Islam as a “precondition of the country’s modernity (Kerslake, Oktem, Robins 2010: 1-14).” Despite intentional efforts to modernize the nation, many tensions between Turkey’s political, cultural, and religious identities have been coming to the forefront. 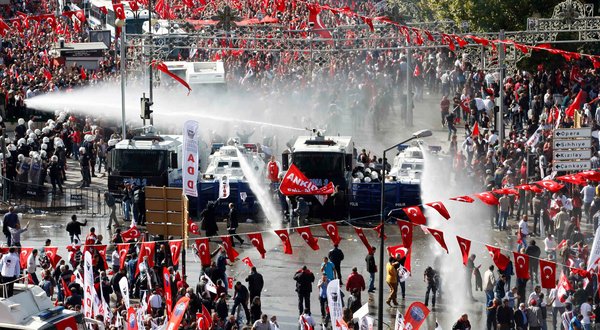 In 2012 on Republic Day in Ankara, the annual celebration of the establishment of the Turkish Republic in 1923, an incident between pro-secular protesters and police forces occurred. Citizens in opposition to the Islamist government took to the streets despite an official prohibition on their march. The image of these riots illustrates the tension between opposing forces of secularism and religion that play out in a hyper-militarized, political way. The protesters’ response was a result of the recent return to a religious, and specifically Islamist, presence in the national government. The past few Prime Ministers of the country, Ahmet Davutoglu, Recep Tayyip Erdogan (now, President), and Abdullah Gul have all been associated with the Justice and Development Party (AKP). This conservative political party was formed out of Islamist thought, though it officially recognizes its ideology as one of conservative democracy. Tibi defines political Islam succinctly: “an ideology [that] stands in the context of the oscillation in Islam between culture and politics, and is related to the politicization of Islamic cultural concepts and symbols (Tibi 2001: 2).” Opponents of political Islam find these politicians in power to be increasingly authoritarian (as evidenced by their use of weaponry to subdue riotous groups) and excessively weary of coups or uprisings (Vela 2012).

How founded are these fears? Is Turkey truly abandoning its secular tradition? According to Aya Göl, the issue is far more complex. Islam in Turkey is not only a religion, but a “historical political marker (Göl 2009 :807),” the identification with which signifies a collective community. Instead of focusing on the classification of the Republic of Turkey, we must realize that “the AKP and the secular establishment have an opportunity to prove that one can be both Muslim and secular within a democratic system (Göl 2009: 807-808).” While we can easily ascribe these two disparate modes of modernization onto the country, Adil Özdemir and Kenneth Frank remind us of the inherent complexity of the lived experiences of Turkish Muslims. Our Western terms are only convenient, at best, and ultimately discredit the experiences of practicing Muslims, non-practicing Muslims, nominal Muslims, devout Muslims, et al (Ozdemir 2000: 26).

Although Atatürk’s vision of a secular Turkey has certainly shifted over time due to “the power and challenge of global European and American technical cultures (Özdemir 2000: 12),” it cannot be discredited or proven wrong. Perhaps, instead of focusing on the legitimacy of Turkey’s secularism, we might be better off critiquing the Western preconceptions that pose the secular and religion definitively at odds with each other. As we can see, while politics and religion further intermingle in Turkey, we need to steer away from the inclination to see this phenomenon as un-secular; both the secular and Islam are integral parts of the nation’s identity that cannot be forced apart.