This article was written by Taylor Ralph ’17 and originally appeared at GreenBiz.com. Taylor is currently an Agricultural Supply Chains Consultant at SSG Advisors.

This spring, a global manufacturer of industrial refrigeration equipment asked me and another MBA candidate — eager, passionate students with a slew of newly minted sustainable business pedagogies in our quiver — to explore emerging market opportunities that also tackled global social and environmental issues. Our project was a result of the company’s strategic focus on tackling major world issues that go beyond eco-efficiency, such as food loss.

My classmate Brett Spusta and I began the project with two parameters: we’d be exploring the issue of food loss and we’d be doing so in Brazil. Beyond that, it was up to us to narrow the scope of our research, develop a team of research partners on the ground, ask the right questions and formulate strategies that could produce cold chain innovation, create meaningful social and environmental impact and be scaled.

It was an MBA student’s dream come true.

What began as a cumbersome undertaking crystallized into a specific, surprising and insightful set of actionable recommendations tailored to Brazil’s unique market.

First, some context: refrigerated transportation is a critical element of maintaining a functioning “cold chain” chain: the series of processes that keep perishable goods at a controlled temperature from producer to consumer (packing, processing, warehousing, distribution and refrigerated displays at the retailer). The most sophisticated refrigerated transportation companies (such as the one we were working with) have a value proposition to efficiently maintain distinct, controlled temperature during distribution.

Food loss is a significant economic, environmental and social justice issue. A third of the food grown globally for human consumption never reaches the consumer. Not only does this have significant climate and human health implications, but the annual economic value of this loss is almost a trillion dollars.

This kind of project aligns perfectly with the philosophy of the University of Vermont’s Sustainable Innovation MBA, from which I just graduated, which seeks to disrupt business as usual and to effectively address global challenges while driving business innovation.

We knew that to be effective, we had to home in on a particular agricultural value chain and fully understand the challenges presented by it. We decided to focus our investigation on smallholder farmers and distributors providing fruits and vegetables to markets in and around São Paulo. There were several factors that went into this decision.

For starters, Brazilians are some of the biggest wasters of food in the world. São Paulo, Brazil’s most populous city, has 12 million inhabitants and nearly 4,000 food markets. As Brazilian agronomist Dr. Anita de Souza explained to us, 150 tons of food are lost daily at São Paulo’s food distribution center alone. Moreover, our refrigeration client already has a strong foothold in Brazil and a vested interest in growing its market share there.

We chose fruits and vegetables because they represent the highest levels of food loss globally and are produced by the least formalized agricultural sector with the least refrigeration technology.

Finally, we focused on smallholder farmers and distributors because they tend to produce and transport most of Brazil’s fruits and vegetables, and because they represent a segment that is underserved by many global refrigeration equipment manufacturers.

Brett and I flew to São Paulo to ground-truth our assumptions. In the process, we spoke to corporate company strategists, regional transport refrigeration salespeople and dealer owners, trucking fleet owners, fruit and vegetable producers, distributors and retailers, as well as members of the academic, start-up and nonprofit communities with a vested interest in the prevention of food loss. Before we arrived in Brazil, we thought the agricultural value chain might look something like this:

But what we found instead, was this (click here for full-size PDF): 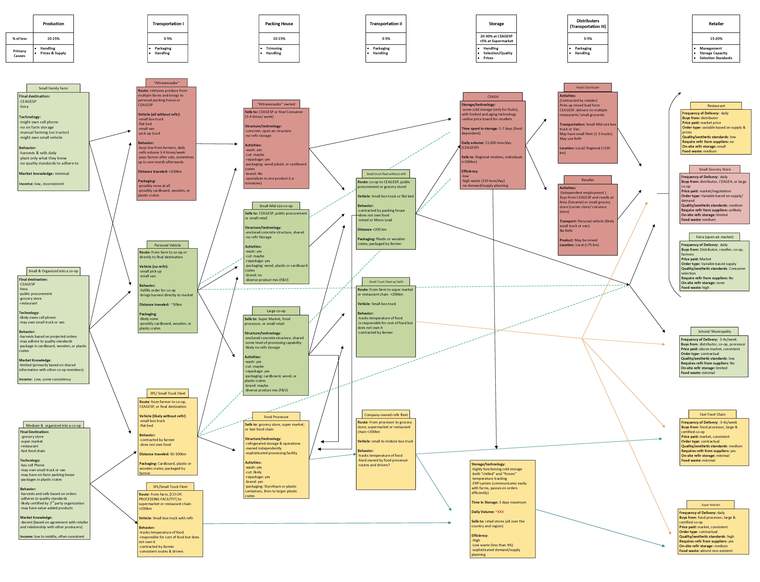 And that’s a simplified version. As it turned out, figuring out where transport refrigeration might insert itself to have a meaningful impact quickly became much more complex.

In the process of mapping this out and speaking with experts on the ground, we came to understand the true drivers of food loss. We knew that inconsistent and incomplete temperature control along the cold-chain was one of them, but in this case the primary drivers were:

As it turns out, the perceived direct economic loss resulting from inadequate refrigeration is not enough to incentivize investment in solutions to these challenges. Additional barriers to investment in cold-chain infrastructure include poor economic conditions among actors generally, lack of credit and financing options, inability to rent refrigeration service, and limited standards and regulations that require refrigerated transportation from the top down.

“As it turns out, the perceived direct economic loss resulting from inadequate refrigeration is not enough to incentivize investment.”

While most producers and distributors in our target market do not currently use refrigeration at all, those that do are likely to choose from a host of low-cost national brands; the precise temperature and tracking systems associated with a premium unit are simply not needed by this market. This market is characterized by lack of investable capital, limited access to finance and credit, relative ignorance of fluctuating market demands, a palpable anxiety surrounding their future and an inability to think long-term.

For this market, rather than cutting-edge temperature control and reducing food loss, the truevalue of refrigeration includes the ability to:

Equipped with this information, we came up with three strategic recommendations for both short- and long-term impact:

Along the way, our perspective shifted from a simple hypothesis to a systems view. We came up with strategies compatible with the emerging trends and market opportunities we found in Brazil. Although we did come to believe that there was real opportunity for transport refrigeration to have meaningful growth in the emerging market context while being a part of the food-loss solution, we also realized that to do so would require a re-framing of how we have traditionally considered the problem. And that will require significantly more research.

It also will require companies to be bold. Not only must they commit to a long-term vision, they will also need to invest in an organizational culture that supports moonshot ideas and unconventional approaches to market analysis. Because this initiative requires serving people major manufacturers previously had not served, it will require a further commitment to embeddedness: deep, on-the-ground research.

As The Sustainable Innovation-MBA’s co-director Stuart Hart would say, businesses need the “worm’s-eye-view.”

Here’s a little video we made to document the experience:

Even in our short time on the ground, we were able to better understand the ecosystem needed to support a successful cold-chain innovation. We met the folks already working on these issues and learned, for example, that until the cyclical impoverishment of farmers is addressed, food waste may continue indefinitely. That is to say, innovation can have prerequisites.

Academic business institutions and social enterprises in Brazil are already recognizing the unfair distribution of value and risk in the agricultural supply chain — and the opportunity it represents for the private sector. Go! Horti, a start-up in São Paulo founded by Artur Santos, is one of these social enterprises. After moving to the agricultural region outside of São Paulo, Santos had a revelation. As he told us:

“I saw all the food being wasted and the families working the land and receiving very little money and taking all the risk. I decided that I wanted to understand them, to live with them and work the land with them, to go to CEAGESP [Company of Warehouses and General Warehouses of São Paulo, a public company linked to the Ministry of Agriculture, Livestock and Supply] with them and watch their produce being sold for almost no profit. I thought, if my pain is the same pain as the farmers — to sell — my company will be much more motivated to have an impact on selling the produce for higher prices.”

As a result, Go! Horti’s mission is to reduce food loss by increasing farmer livelihoods. Santos’ company acts as a translator between retailers and producers, negotiating fair contracts that add value for both the farmer and the retailer. From Santos and others like him, we learned that price variability at the marketplace is at the root of the problem. Without this information — the result of being embedded in the value chain, even briefly — development of our strategies simply would not have been possible.

“Not only did I experience working up and down a value chain, performing primary research in an international setting and understanding the true complexity of sustainability challenges, it helped me understand what I want to do with my career.”

For me personally, the project was invaluable. Not only did I experience working up and down a value chain, performing primary research in an international setting and understanding the true complexity of sustainability challenges, it helped me understand what I want to do with my career: how I can best leverage my personal attributes of attention to detail, emotional intelligence and resourcefulness with the tools gained through The Sustainable Innovation MBA curriculum.

The ability to convene people, to act as a translator between stakeholders while getting to the bottom of a systemic problem, made my experience working on this project both thrilling and confirming. This is the work I want to be doing.